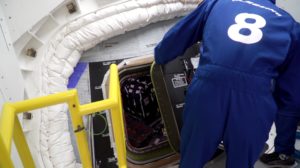 The Boeing pad operations team closed the hatch to the CST-100 Starliner inside the White Room ahead of its liftoff atop the United Launch Alliance (ULA) Atlas V rocket for the Orbital Flight Test-2 (OFT-2). Inside the Starliner is “Rosie the Rocketeer,” an anthropometric test device, and about 800 pounds (362 kilograms) of cargo, 500 pounds (227 kilograms) for NASA, bound for the International Space Station.

About 15 minutes prior to liftoff, the Starliner spacecraft will transition to internal power.

Members of the pad team also completed leak checks, ensuring the hatch is sealed and pressure readings within the spacecraft are stable. This is one of many checks during Starliner’s OFT-2. The end-to-end test is a critical developmental milestone on the company’s path toward flying crew missions for NASA’s Commercial Crew Program.

The pad team will soon depart Space Launch Complex-41 and head toward a safe distance away from the launch pad. At about 10 minutes prior to launch, the Crew Access Arm will retract away from the spacecraft.

At L-3 hours, Starliner and Atlas V engineering teammates in Florida and flight controllers in Houston set the Starliner’s Mission Elapsed Timer (MET), which is the system the autonomous spacecraft uses to know what phase of the mission it is in to correctly perform the appropriate next steps. Another pre-flight check of the MET is performed during the terminal count, which is within 4 minutes of the targeted liftoff time. Flight controllers will verify it again at about 10 seconds after liftoff.