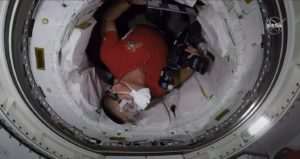 Floating inside the Harmony module, the crew of the International Space Station (ISS) opened the hatch of Boeing’s CST-100 Starliner and moved inside to become the first people to enter the spacecraft on orbit. Starliner docked to the ISS yesterday afternoon to complete a major milestone of the Orbital Flight Test-2 (OFT-2) for the uncrewed vehicle. Because the docking occurred late in the ISS crew’s workday, the hatch opening did not take place until this morning.

“This is a momentous day in NASA’s history and just paving the way to the future as we start enabling commercial flights here in low Earth orbit, while NASA pivots to the moon and eventually on to Mars,” said NASA Astronaut Bob Hines.

The crew will spend the next several days unloading some cargo from Starliner and performing systems tests inside the spacecraft. They will close the hatch on May 24 and then work with ground controllers on May 25 to see Starliner disconnect from the station and make its return flight home to Earth.